User testing through a worldwide health crisis? Can it be done? 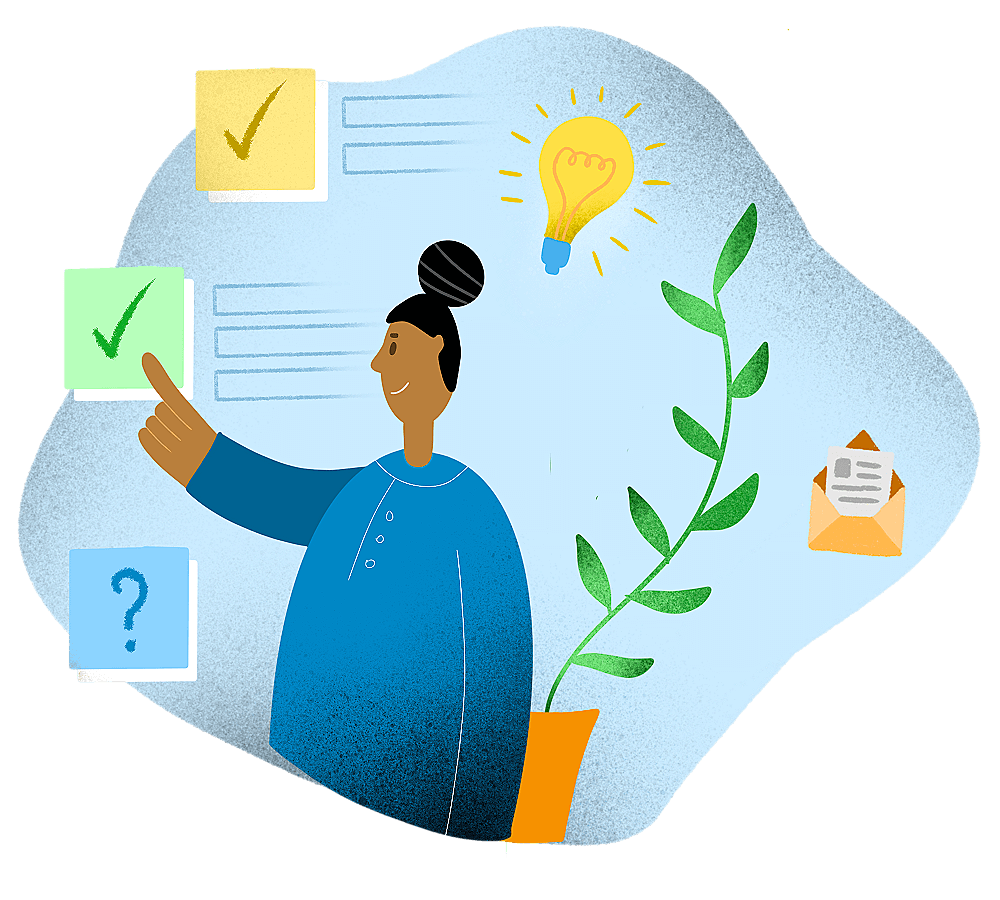 I would argue that virtual UX & UI prototyping and interview/research tools have never been more important. Katryna Balboni of User Interviews spoke with 6 professionals this year about how they’ve been conducting user studies.

We are still adapting to this new world where a good portion of the workforce has gone remote, but to thrive … we have to continue to innovate!

At the end of March this year I was invited to speak at an incredible UX conference in Seattle, WA: ConveyUX.

It’s been running now for 6 years and is, let me just say, gaining steam. There were peeps from Facebook, Google, Amazon, Dell, and Microsoft giving talks (to name a few). I was speaking as part of the software design + developer UX track, sharing about rapid app building for fundraising software. And I had a blast.

I was 1 of 45 speakers there, and it was amazing to take it all in. My session was called 20 Million People, 12 Days, 8 Organizations, and 1 George Clooney. It detailed the build process our software team used to quickly stand up a custom application we were tasked with building: a donor platform for a group of nonprofits, GERC (the Global Emergency Response Coalition). The goal was to raise funds to combat the unfolding and severe issue of famine in the horn of Africa. I walked through how we used development, design, and UX to help raise over $5 million dollars in under two weeks for the campaign.

Seattle: You are a gem. A place of rain-cleansing-hippie-yet-cosmopolitan innovation. I applaud your laid-back tenacity. And also thank you for Pearl Jam, Starbucks, and Amazon.

However, for me it was never about finishing at the top of the leaderboard at all. It was about pushing myself farther than I’ve ever been, endurance-wise.

It was about finishing strong every day, which I feel like I did – for 6 days and 120 miles!

It was hot, and I didn’t really want to run yesterday. About 8 miles in, I thought: What am I doing!!!? So it was just one race shoe in front of the other for awhile. We started at the Vail athletic fields for the race start; here’s my wife, getting me all set for the last stage of the event:

The course sent us up into the mountains around Vail, and after about 30 minutes I could see the city below…

Here’s the amazing birch-tree forest 🌳 we ran into midway through the day, it was a welcome sight after all the direct Sunday sun. 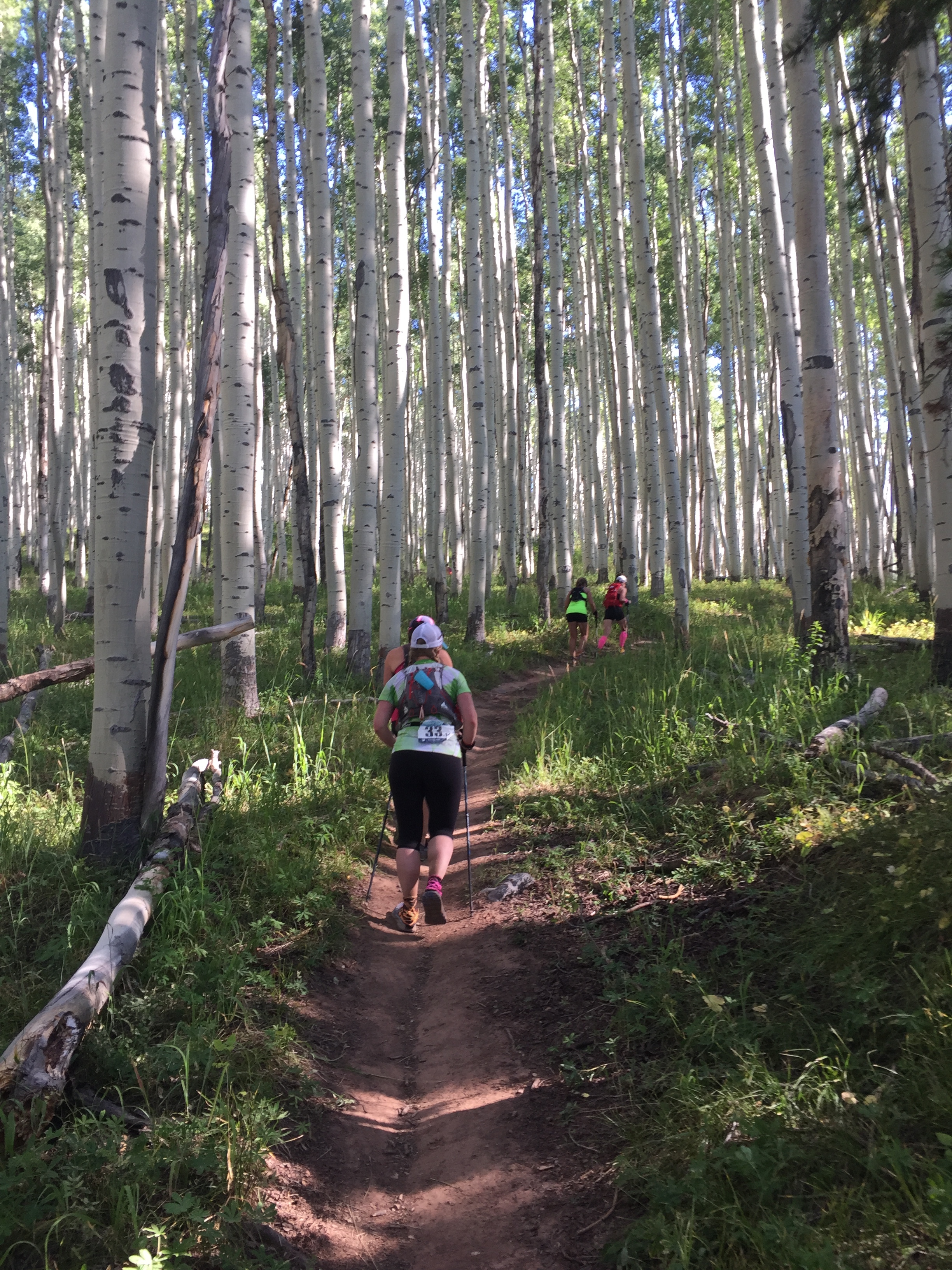 It was a gorgeous forest, and a member of the support staff dressed up in full He-Man garb appeared at one point, shouting “You have the power!!!!!”

Then I hit a painful-on-the-knee downhill that went in for about a mile near a creek; it was so steep and I did not like it. Near the end of the run, I was high up above the town of Avon grunting it out and cooking a bit in the sun. Thankfully it was windy. I can’t really complain about weather as it was beautiful every race day and in the 60’s or 70’s.

22 miles and 6 hours and 10 minutes in, I came around a bend near the finish and was actually shocked it was OVER. Here I was, with my race crew, at Beaver Creek in Avon, CO.

We had an awesome poolside afternoon at the Park Hyatt, followed by a nice awards banquet in the hotel. After a week of porta-johns and camping, I felt like I was living in a dream state: hanging out in 6 separate hot tubs, with waterfalls and waiters with mountains of towels, and an endless supply of food and drinks. (I’m not gonna lie; I felt a bit like Kanye.)

Thank you to all my support peeps! This was such a challenge, but besides being able to say I ran 120 miles through Colorado mountain peaks and towns, I can also say that there’s a good bit of true grit deep inside me. Sometimes all it takes is something like the TransRockies run to pull it out of you …

Yesterday was 24 miles. It doesn’t sound like a lot. You could drive it pretty quickly, but running it … over a mountain … after you’ve already run 75 miles in one week, is a bit different.

My body is fatigued and I have to muster up hidden strength every day at this point. Yesterday was a huge run; even the pros here were saying how tough it was. We ran a huge ascent around Resolution Mountain and then over a long ridge over the Vail ski resort.

Suffice to say, it was lovely: 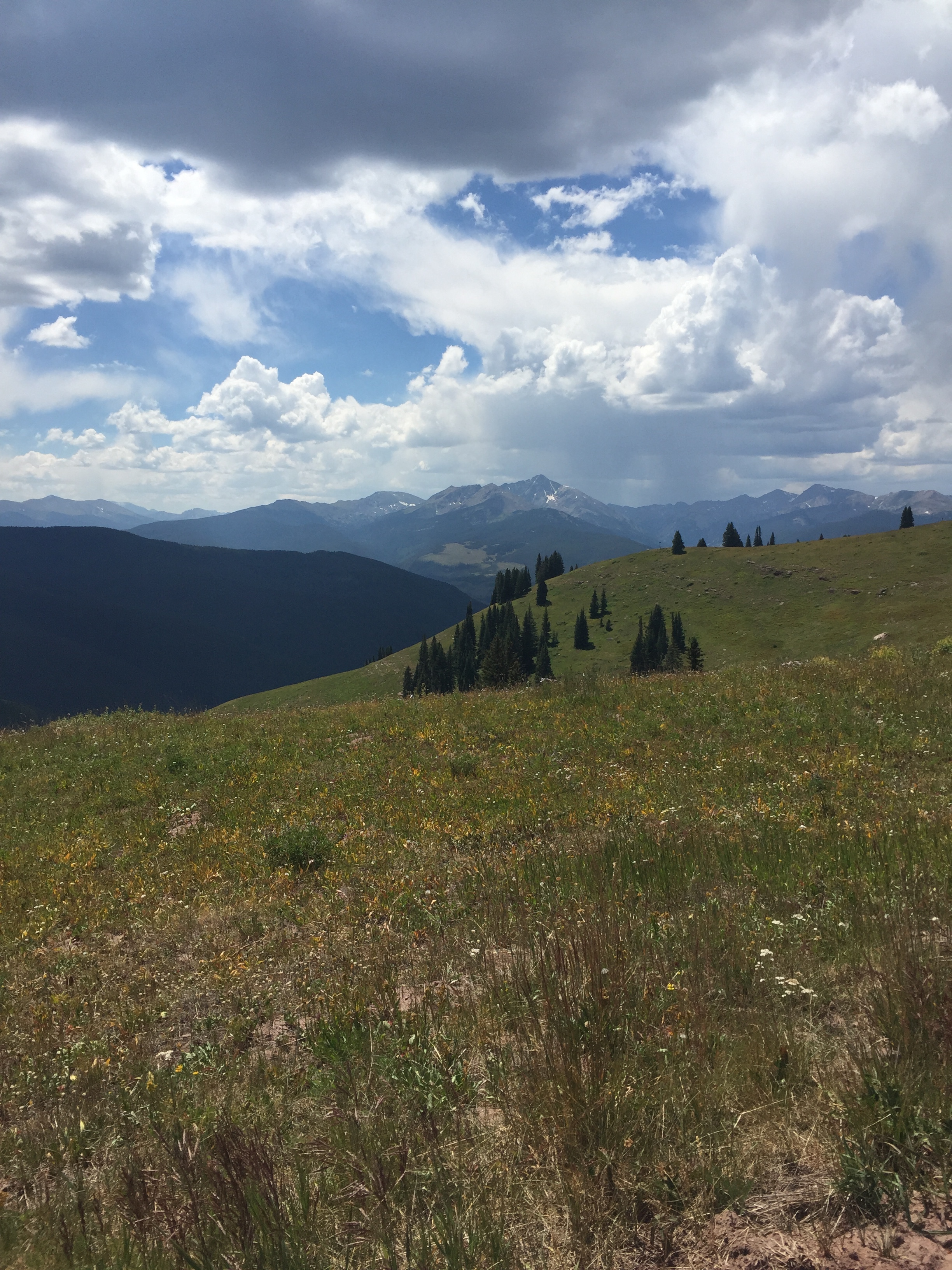 After about 6 hours and 55 minutes, I came across the finish line and was greeted by my awesome support crew.

Yesterday was a long day. I didn’t sleep well Monday night; I was up at 4am … pre-race jitters.

After some great coffee and and breakfast in Buena Vista, we made our way to the race start … I started getting nervous about 1/2 a mile out from the start line … Eeeeeeek!!! What have I gotten myself into?!

Race start was fun, rock-n-roll and a bunch of support from my team (wife & brother and sister in-laws). I was crazy excited, and READY TO GO. 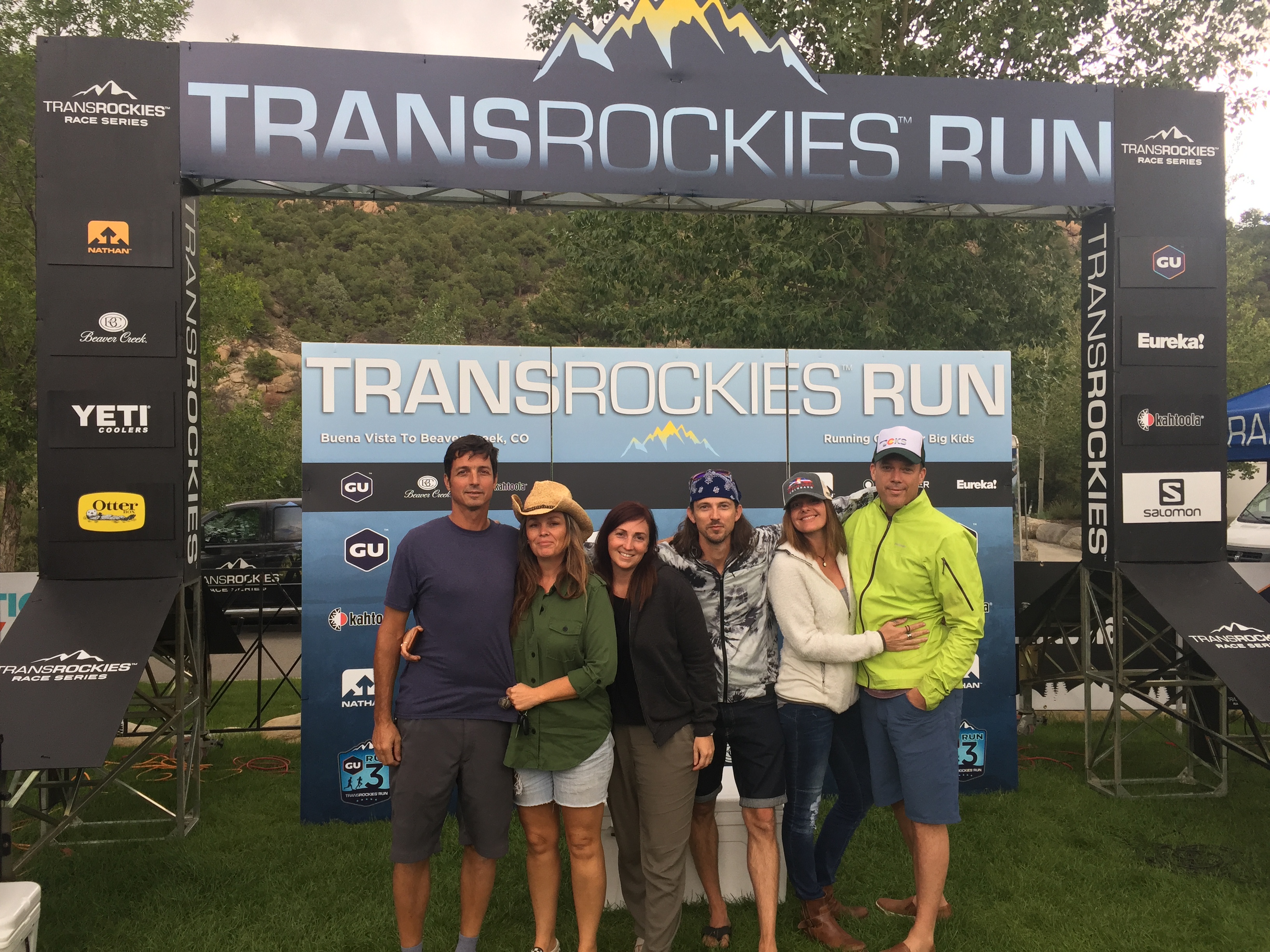 The gun went off and all the runners filed out. It was a 20.8 mile trek today; it basically looked like this:

I feel like I ran pretty well today. I finished in 4 and 1/2 hours and took in some really beautiful views. Aside from some slight altitude sickness around 17 miles and my nagging knee patella, things were good. The toes are crying a bit and need some attention, though. I held back a tiny bit today. (Thankfully.)

Today was crazy … we made a 3200 ft ascent over Mt Hope from Vicksburg. It was quite a climb, but we were rewarded with views like this from the top: 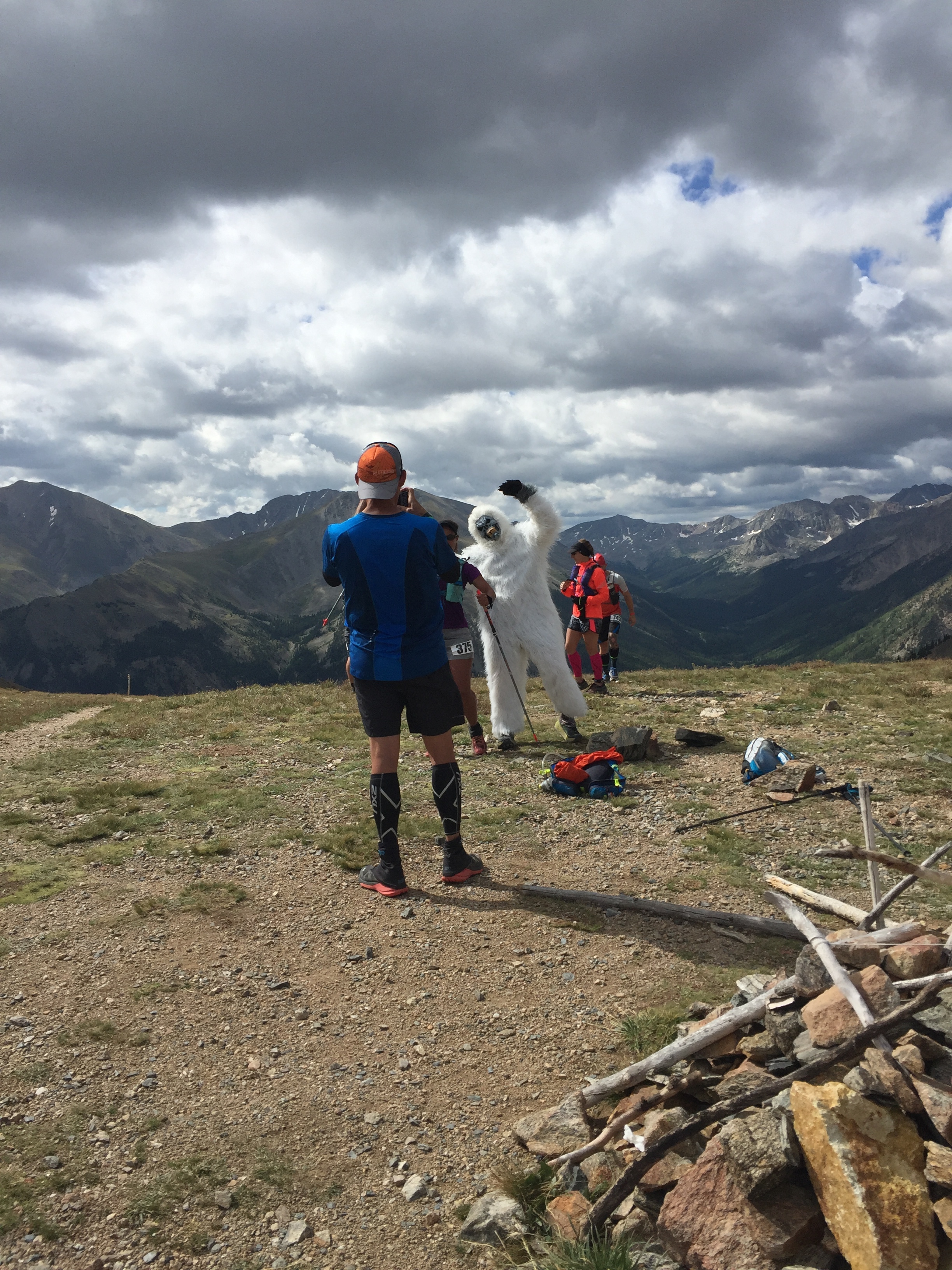 It was only about a 15 mile day today but took me 4 hours because of the summiting and subsequent descent. The descent was nuts. I thought I was going to spill a few times on the way down because of the steepness. I will say the woodsy rocky trails reminded me of Tennessee trails, and that made me smile …

Today was not great on the ‘ol knee, but the toes are doing better today with some help from the medical team here!

We ended up in Leadville, CO today (the only place I’ve had a cellular connection thus far) and are camping here tonight before doing the longest run of the 6 days tomorrow: 26 miles.

Now, for some dinner and beloved sleep.

Ok, technically tomorrow is rest day as well  … but since tomorrow includes traveling, checking in, and psyching myself up … I’m just going to say this is rest day.

I’ve been in Colorado for about a week now allowing my lungs to get used to the mountain air. Breathe in, breathe out. Rinse and repeat.

It’s been a gorgeous weather week and I’ve had some amazing mini-training seshes here along with great family hang time. I’ve also become good buds with, Pollo, my brother’s family dog 🐶 and taking morning walks with him that look like this: 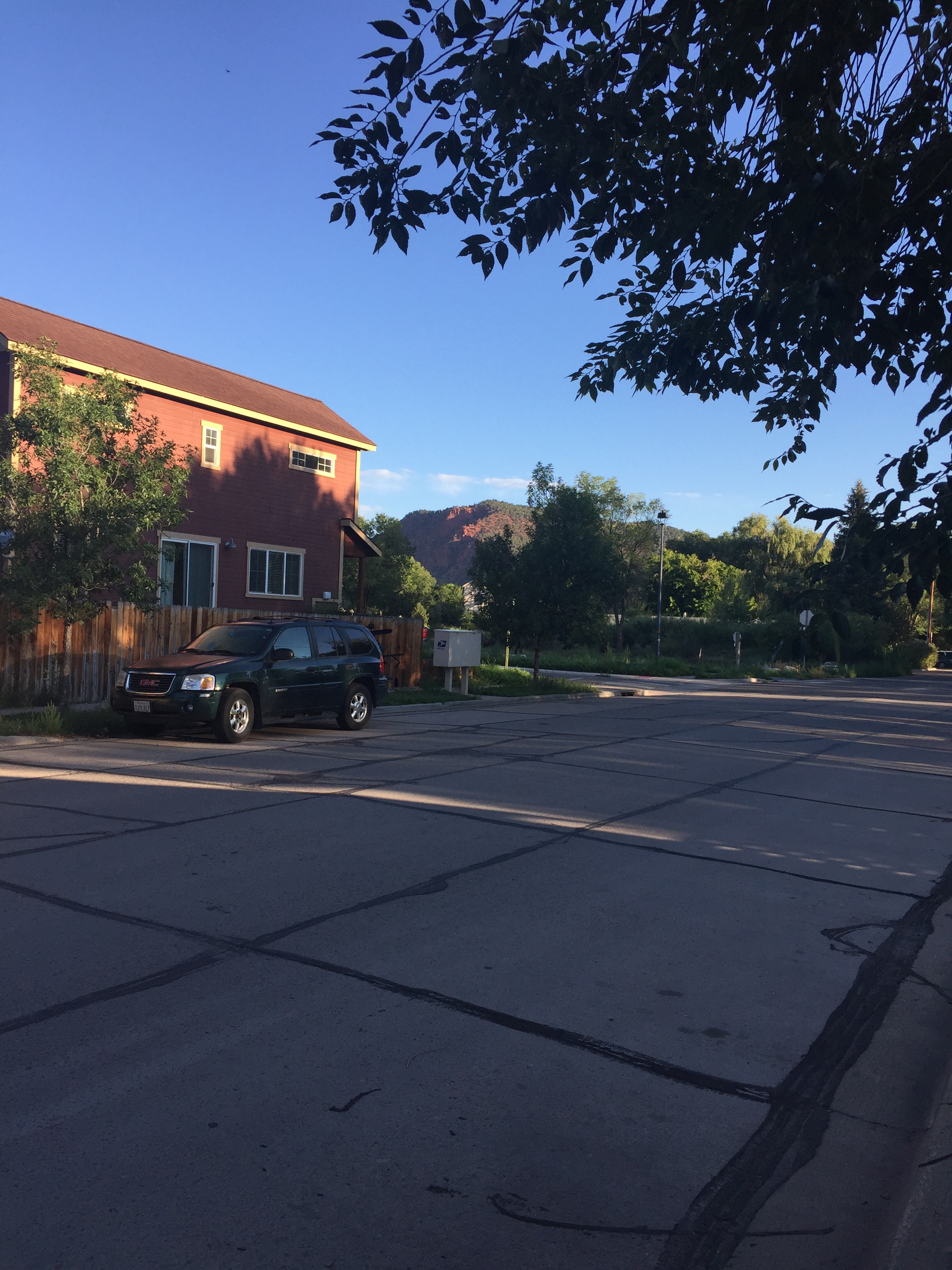 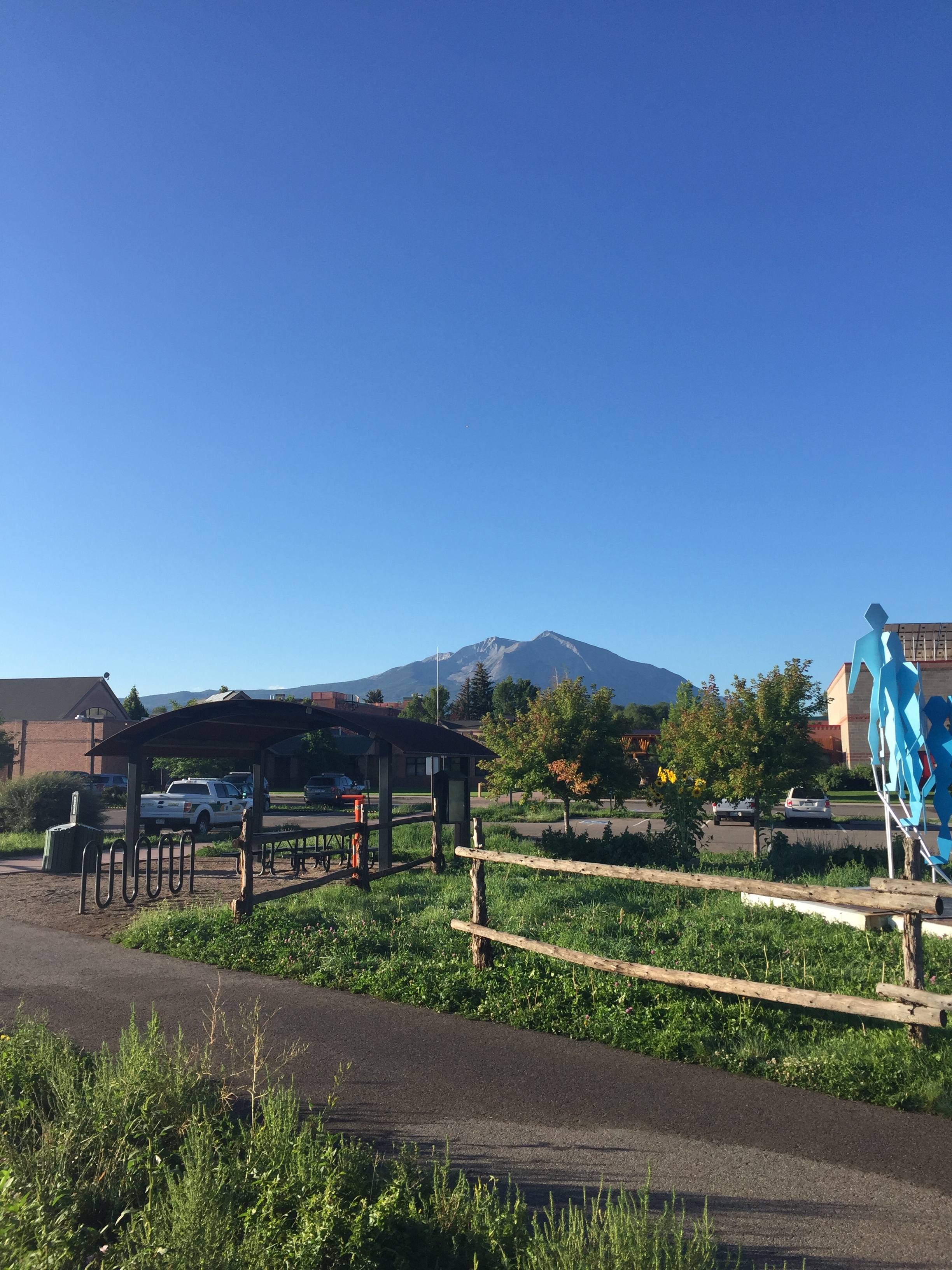 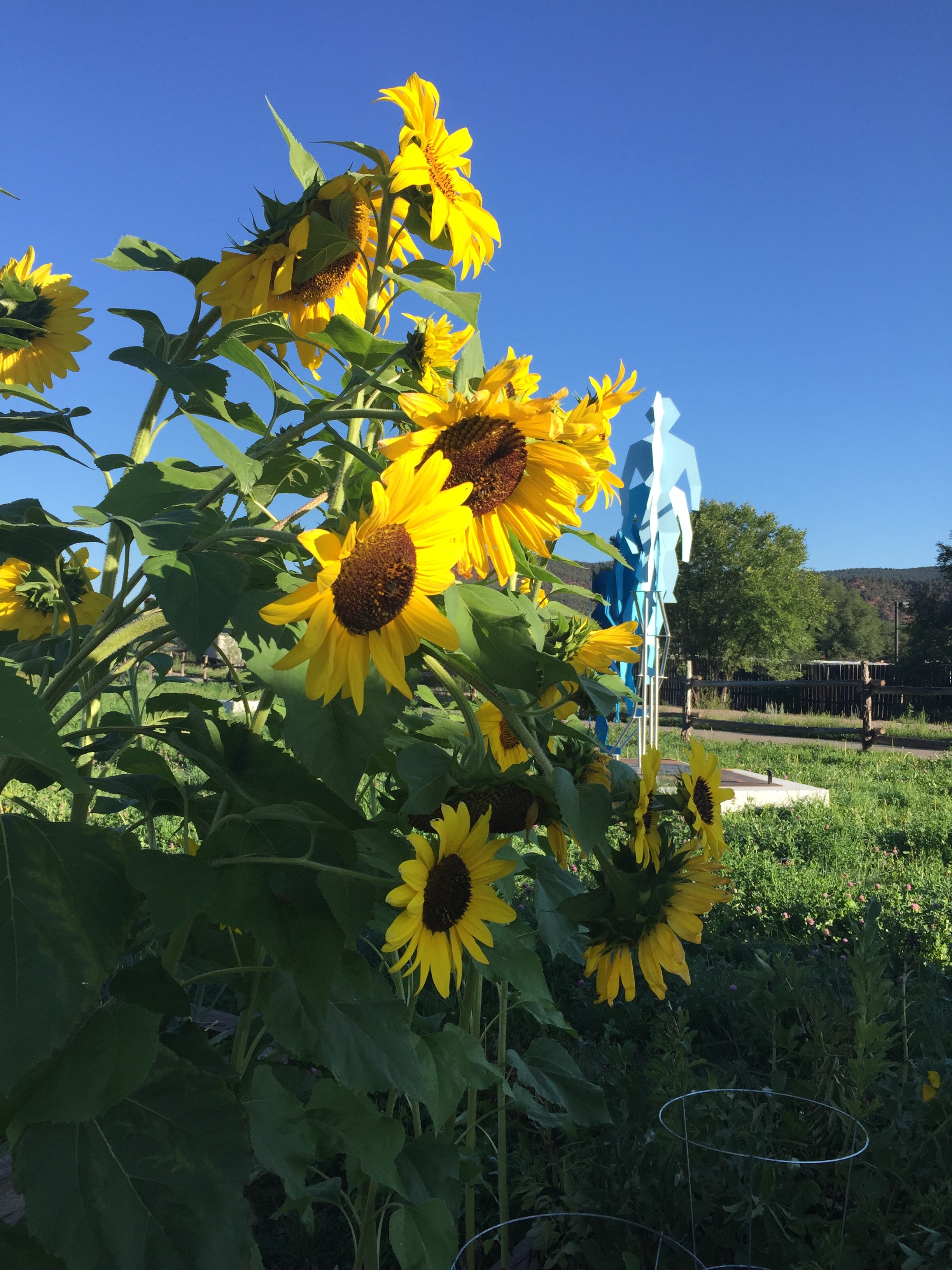 So now, on to Buena Vista where the race will begin: 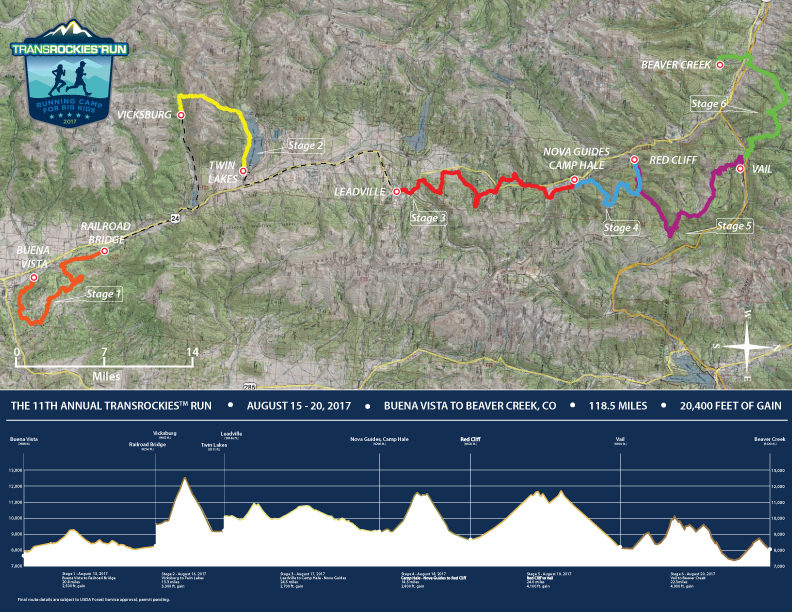 Above is an overview of the race 🏁

Ok, back to packing!

It all started a year ago. My brother-in-law asked me to run a 120mi race with him through the mountains of Colorado. “Ummmm … ” was my reply.

In fact, I didn’t really answer his question for 4 months. Finally, after much soul searching, praying, and deep breathing, I said yes. And so 2017 began with me – running – a lot.

I ran the Nashville 1/2 Marathon in April, then immediately shifted my focus to training for the big one: the http://transrockies-run.com in CO. I can’t say the past 3 months have been easy. I’ve had terrible knee issues and neck soreness that still won’t go away. I also found out a few weeks ago that my race partner in crime – my brother-in-law – the one who got me into this madness … has pulled a hamstring and cannot run. So, now I’ll be running solo. It’s fine though, I only have to run alone for 120 miles. 😮

Seriously though, I’ve been going through some of my gear tonight and reflecting on all the training, all the time invested in prepping for this race, all the pain, and all the adrenaline that’s in my body.

I am excited and nervous and I’m fighting the feeling of being completely overwhelmed tonight. I was doing some training today on a mountain with my brother, and as I kept jumping over the the rocks and logs on the trail, a Bible verse I read a long time ago came back to me:

“He makes my feet like the feet of a deer and sets me securely on the heights.”
‭‭Psalms‬ ‭18:33‬ ‭HCSB‬‬

I have no idea how grueling the upcoming 6 days of this race are going to be, but I really believe I’ll be ok.

So, I have a few more days to shake off the jitters. Meanwhile, I’ll be eating pasta and lots of salty things!

(If you want to follow along on this adventure with me, I will try and post an update every race day on this blog. Of course, there might be times where I’m just too deep in the mountains to connect to the webz.)

Now, off to rest while I still can …

I love the possibilities of SVG.

And in the current landscape of mind-blowing retina displays, we can’t ignore them. Chris Coyier gives a great overview of using them; I used his technique recently in a project. It worked great! I highly recommend it.

Also be sure to check out Kyle Foster’s SVG workflow video if you’re setting all this up for the first time.

Front-end development. What is it? Not all code running in the browser is “front-end code” anymore. It’s become blurry and difficult to assess what a front-ender should be responsible for in 2016. Single-page apps have joined so many coding technologies together that we need something to help us understand the division of who-does-what.

On the one hand, there is still a lot of design and user flow to consider. And on the opposite side, we still need servers that retain our data. In between, Angular and other JavaScript frameworks have been doing more and more dynamic tasks: Like taking that data and using API’s to push it to the browser (a la JSON).

That’s when I came across this article early this year. It has a fantastic visual showing the range of modern web responsibilities, and as the author states:

almost all developers occupy some contiguous segment of this continuum

I love this explanation. Bravo, Matt. Bravo. Thanks for breaking it down for us.

I had the opportunity of working with the team at MonkDev (Monk Development) this Spring of 2014. MonkDev builds sites mostly for nonprofits and churches. I was really impressed by the sense of camaraderie and expertise at Monk.

Some of the sites I worked on this Spring: